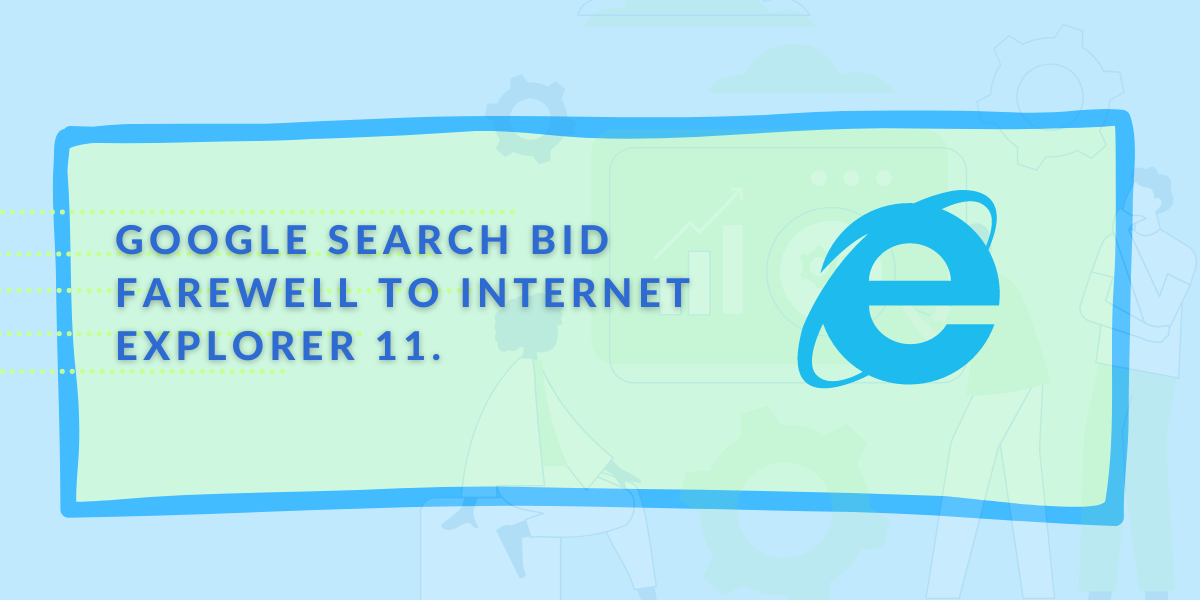 Posted at 13:29h in trending in seo by lotus
Share

Google search bid farewell to Internet Explorer 11. It is finally out.

Google Search has announced that it will no longer support Internet Explorer 11 meaning no search feature will be available on explorer, making it the latest product to discontinue support for Microsoft’s legacy browser.

They said it’s time to move on from the dated web browser. (I mean we all have been there and analyzed the speed)

Google Search has announced that it will no longer support Internet Explorer 11, making it the latest product to discontinue support for Microsoft’s legacy browser.

Internet Explorer 11 was first released in 2013 alongside Windows 8.1, and it was also ported back to Windows 7 because many Windows users didn’t feel the need to upgrade their operating system at the time. However, with the release of Windows 10 in 2015, Internet Explorer was quickly replaced by Microsoft Edge.

However, because Edge was not available in previous versions of Windows, Internet Explorer 11 remained the default browser on Windows 7, 8, and 8.1.

According to the company, Google Search no longer supports the Internet Explorer 11 web browser because  they tweeted “we did the math.” It’s finally time.”

Malte Ubl, a Google software engineer, announced the news on Twitter, stating that it is especially good news for the developer community: 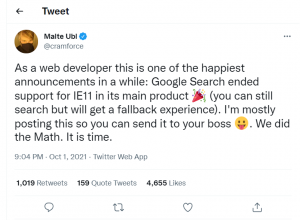 As a result, despite the fact that Google Chrome, Mozilla Firefox, and other third-party browsers provided a better browsing experience, the browser was able to maintain its market share.

As per 9to5Google, “Google has not simply cut off Internet Explorer 11 from using Google Search, leaving people unable to search the web. Instead, Internet Explorer customers are now shown a rudimentary “fallback experience” for Google Search, which can perform basic searches but isn’t as fully featured as Google is on modern browsers. To put it plainly, the results pages are unattractive, but at least workable for those who cannot use Chrome, Edge, or Firefox.”

For a fact check, do you know only 5.21% of people use Internet Explorer.

If you’re still stuck on Internet Explorer 11, It’s time for you to move on.

But if you still want to hang around explorer, you’ll be able to use Google Search via a “fallback experience” created by the search engine.

While searching the web will continue to work in Microsoft’s legacy browser, the experience will be less robust than in other browsers.

With the release of Windows 11, now is the time to say goodbye to Internet Explorer 11 and explore all of the new features in Microsoft Edge if you want to stay on the radar of the software giant’s ecosystem.