What can you do if you don’t like the way Google rewrites your titles? 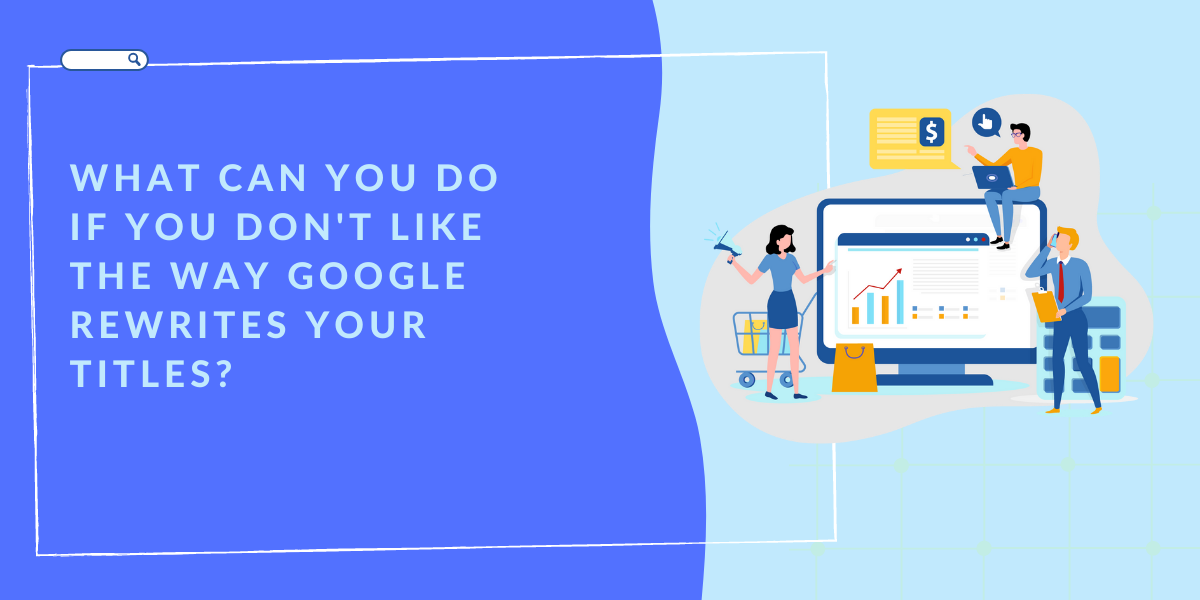 Posted at 08:44h in trending in seo by lotus
Share

In case you are thinking why google will rewrite your title tags?

Concentrate and try to remember the latest update google rolled out about rewriting title tags. In case you don’t already know about it, Do not worry! We got you.

Here’s a detailed Blog about the latest title rewriting update.

Learn about the new update and see what it has to do with your website’s rankings.

It’s well known that Google modifies SERP titles by making minor changes, such as attaching a company’s name at the end. However, Google is currently replacing titles with new content.

Google said this “update is designed to produce more readable and accessible titles for pages. In some cases, we may add site names where that is seen as helpful. In other instances, when encountering an extremely long title, we might select the most relevant portion rather than starting at the beginning and truncating more useful parts.”

With this update, SEO’s are talking about their experiences, and how google little updates have failed them.

Here’s a detailed insight into it.

If you’ve seen a shift in your CTRs, it’s worth checking to see if Google has updated your title link. Numerous methods have been devised by SEOs and technology vendors to accomplish this.

Since it was evident that Google has changed some titles which also changed their meanings and didn’t make any sense, now google is being better at changing topics.

Alas, there is little you can do to modify Google’s title links directly, but adopting a more holistic approach to the issue can help you tailor more insightful titles and avoid Google’s bad rewrites.

“Google created a form where you can submit your feedback for incorrect or egregious titles,” Lily Ray explained. “Otherwise, pay attention to when the overwrites take place and what they look like; this could provide insight into potential issues Google may have with your titles and offer some inspiration about how to adjust them.” Google also provides specific examples of the types of titles it intended to overwrite, allowing you to determine whether your titles fall into any of those categories.”

“If you’re seeing poor title links for your site, try to look at it objectively,” Try to figure out your mistake and rectify it “Are you keyword stuffing? Is the title descriptive enough? Is there too much boilerplate content in the text? All of these factors must be considered before concluding that Google has done something wrong. If you’re certain that they’re to blame, try to make the on-page content more closely aligned with your goals.”

This is your time to start testing the wrongs you have been practicing for a long. Try to optimize your SEO practices by leveraging this opportunity. See why Google changed these titles, what was wrong with your original title, Which title will your audience like.

After analyzing Use all possible tactics and let your audience speak for you.

We trust Google for traffic, and Google depends on us for content to display to users. When the title changes went live in August, Google claimed it wasn’t a new thing, which was only half-true because the search engine has been known to replace titles before.  Furthermore, it displayed title links, which could have confused users and discouraged them from visiting some pages. It is impossible to say for certain that SEOs holding the company accountable for flaws in its new system were the catalyst for Google to “revert many of the worst offenders back to their original status.”