Google’s reply on “Is Alt text a Prominent Ranking factor”? 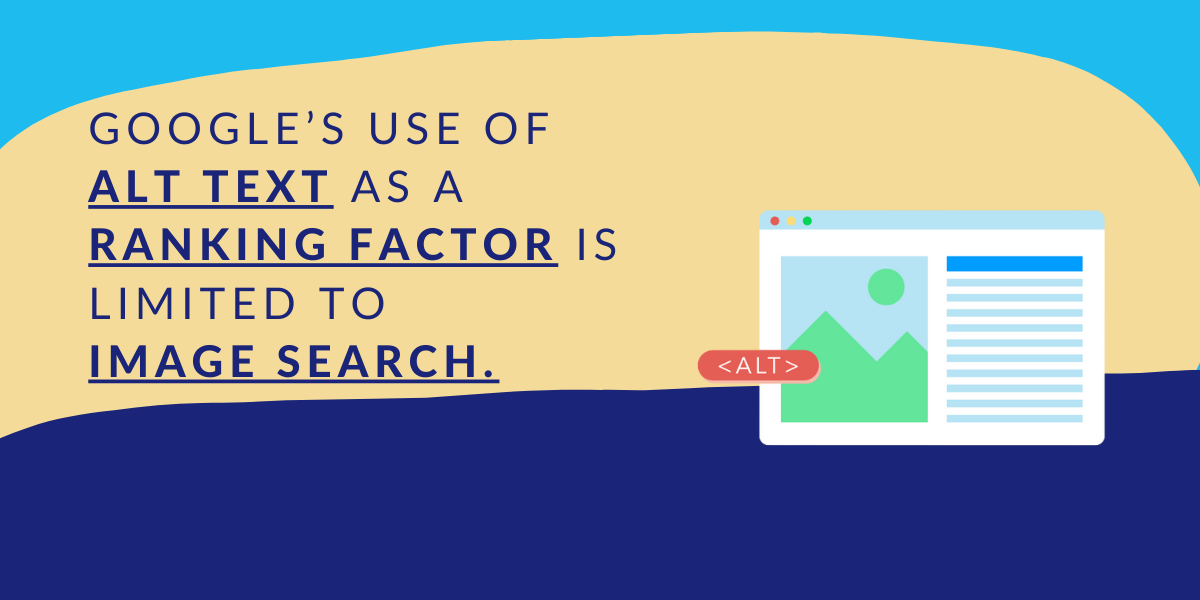 Posted at 09:04h in trending in seo by lotus
Share

We all see thousands of images every day, some of us would see the same picture over and over again, but do you know what goes behind and how you are able to see an image based on your search.

If you don’t know we are here for the rescue and if you already know don’t worry we are not going to discuss all noob things. So let’s dig in and see what are alt text and how pr how not it contributes to your SERP rankings.

Alt text represents alternative text, and you’ve probably seen it before if you’ve ever had a problem with a page’s images not loading properly. The written language that appears in replacement of the visuals is known as alt text.

Not only does the alt text reflect the image’s content, but it also conveys the context in which it was created. Alt-text is frequently confused with the alt tag; however, the alt tag just contains the picture description, not the entire property.

Alt-text is solely a factor for image search, not regular online search, according to Google.

The usage of alt text as a ranking element by Google is limited to image searches. It adds no value to a standard web search.

Mueller answers a number of questions concerning alt text, resulting in a number of insights about how it affects SEO.

From a usability standpoint, adding alt tags to images is suggested since it helps visitors who use screen readers.

When it comes to SEO, alt text is advised if you want your image to rank in image search.

When it comes to using alt text in general, Mueller recommends focusing on the accessibility aspect.

When asked by Mueller he said:-

“I think it’s totally up to you. So I can’t speak for the accessibility point of view, so that’s the one angle that is there. But from an SEO point of view, the alt text really helps us to understand the image better for image search. And if you don’t care about this image for image search, then that’s fine do whatever you want with it.

That’s something for decorative images, sometimes you just don’t care. For things like stock photos where you know that the same image is on lots of other sites, you don’t care about image search for that. Do whatever you want to do there. I would focus more on the accessibility aspect there rather than the pure SEO aspect.

It’s not the case that we would say a textual webpage has more value because it has images. It’s really just we see the alt text and we apply that to the image, and if someone searches for the image we can use that to better understand the image. It’s not that the webpage in the text web search would rank better because it has an image.”

Sure it is not a prominent factor in for your content rank high but it sure acts as a catalyst when it comes to understanding an image or ranking your image in search.

Mueller emphasizes the necessity of utilizing alt text that is descriptive.

For those who can’t see the image, the text should describe what’s in it.

“In a case like this, I would avoid the situation where you’re just repeating the same thing over and over. So avoid having the title of a product be used as an alt text for the image, but rather describe the image in a slightly different way. So that’s kind of the recommendation I would have there.

So by far, you know how alt texts are relevant and in some cases not relevant to you based on the content you deal with. According to us, it’s always better to incorporate these small practices while posting anything online because it’s always about how easy and comfortable you make your audience feel while searching for your content. So these small things might not bring a huge impact on your ranking but they always push your business to be on the top of it.