Is There a Correlation Between Your Niche and Google’s Algorithms? Google Answers. 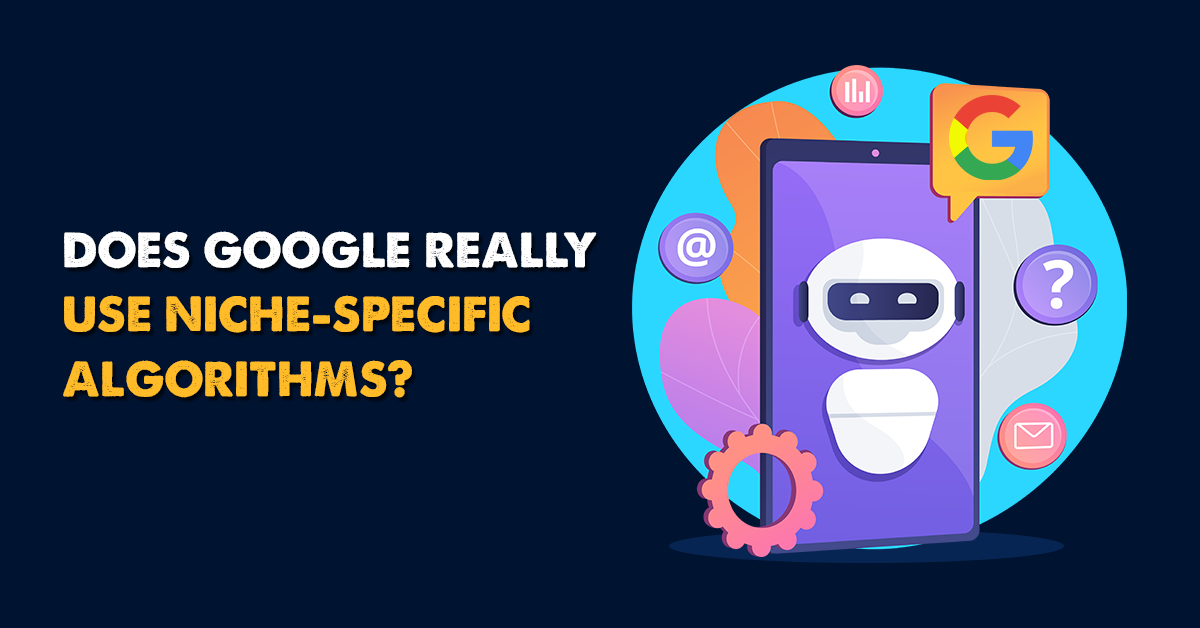 Posted at 12:47h in trending in seo by Mohit Behl
Share

In Google’s Office-hours Hangout recorded on 25 March 2022, Google’s John Mueller discussed if Google uses different algorithms to evaluate different niches to arrive at the search results. A question posed by one of the viewers open the doorway to a very interesting dimension. Do ranking factors actually differ based on which niche an algorithm is evaluating or is it just hearsay? John said it was not so much about the niches but the type of content their websites are offering, which means Google does treat different kind of content differently. If researches across niches are to be believed, there seems to be a clear outline that the content length, the types of links and their quality, and the quality of visuals (pictures and videos) did have a role to play in it all. Let’s hear it from the horse’s mouth.

So, is it true that different niches are evaluated by different Google’s algorithms?

Here’s the question that was asked by one of the viewers on the stream.

“Is it true that Google has different algorithms for the indexing and ranking of different niches? We have two websites of the same type, and we’ve built them with the same process. The only difference is that the two sites are different niches and currently one is working while the other one has lost all ranking.”

To which John was quick to say, as we mentioned above, it is not about the niche but the type of content they offer. And that what type of niche it is had no affect on which algorithm Google chooses to determine the said niche’s ranking.

“So, I don’t think we have anything specific with regards to different niches. But obviously different kinds of content is differently kind of like critical to our search results. And if you look at something like our Quality Raters Guidelines, we talk about things like Your Money Your Life sites, where we do kind of… work to have a little bit more critical algorithms involved in the crawling and indexing and ranking.

But it’s not the case that you would say like… a bicycle shop has completely different algorithms than… I don’t know… a shoe store for example. They’re essentially both ecommerce type stores.” said John.

How unique and valuable someone finds a piece of content is very relative, there’s still a way to go about creating some that not only our viewers but Google too would appreciate. It means that while you might create content around a topic that has already been done to death by a thousands of websites out there, what new you bring to the table to differentiate yourself from the rest out there, is the question. That includes including in-depth, well-researched, well-organised data and information along with visuals that would hook you right in. Here’s what John had to say about it.

“But the thing that you also mentioned in the question is that these are content aggregator sites and they’re built with the same process. And some of them work and some of them don’t work. That to me feels like it’s… kind of like… I don’t know your sites, it feels a bit like low effort affiliate sites, where you’re just taking content feeds and publishing them.

And that’s the kind of thing where our algorithms tend not to be invested in to make sure that we can crawl and index all of that content. Because essentially it’s the same content that we’ve already seen elsewhere on them. So from that point of view, if you think that might apply to your site, I would recommend focusing on making fewer sites and making them significantly better.

So that it’s not just aggregating content from other sources but actually that you’re providing something unique and valuable in the sense that if we were to not index your website properly then the people on the Internet would really miss a resource that provides them with value.

Whereas if it’s really the case that if we didn’t index your website then people would just go to one of the other affiliate aggregator sites, then there is no real reason for us to focus and invest on crawling and indexing your site. So that’s something where, again I don’t know your website, but that’s something that I would look into a little bit more rather than just “oh Google doesn’t like bicycle stores, they like shoe stores instead.”

One sureshot way to set your niche apart from others is by creating content based on user intent. And then leverage it to build links in a streamlined way. If you can pinpoint on who your users are and what their intent is, with some effort you can create something that truly stands out in the market and get those higher rankings you’ve been chasing after for a while. Watch John Mueller’s full response to question at the 23:49 minute mark and may be also stick around for the rest of the discussion for some other valuable insights.