Google Announced the End of The Core Update Rollout. 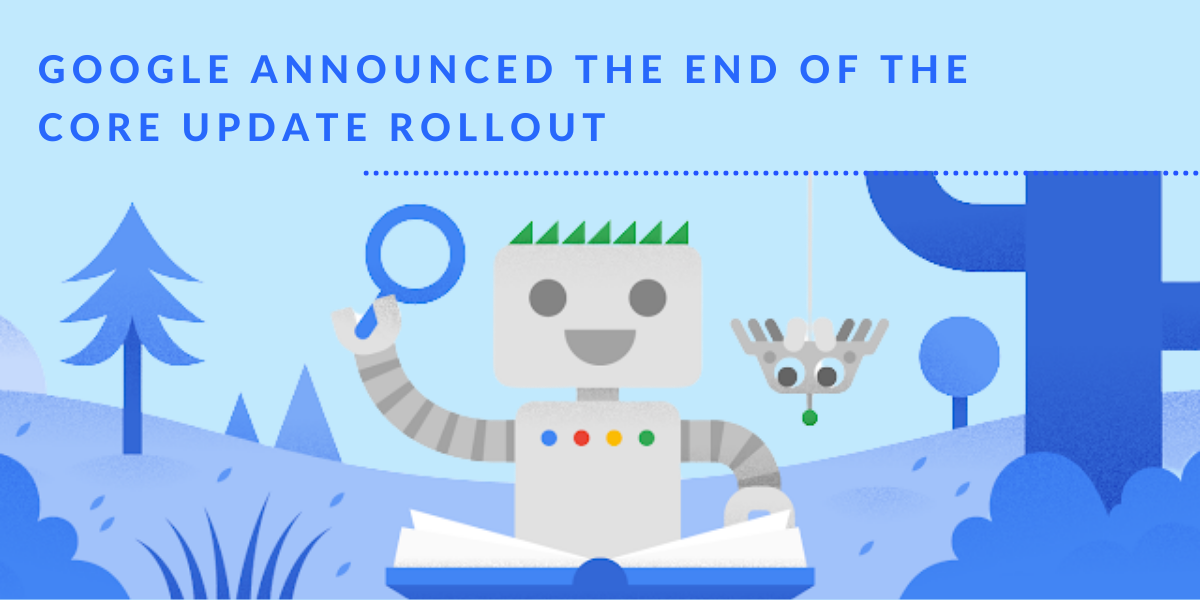 Posted at 09:00h in trending in seo by lotus
Share

Google ranking scoreboard has always been a bumpy path and now to complicate it a bit more Google’s November Core Update Is now Over.

November 30, 2021, the day after the big Cyber Monday and Black Friday shopping day, Google’s November core algorithm upgrade is officially over. Sites that saw their rankings fluctuate upward or decrease should not expect any further adjustments until the next algorithm update. 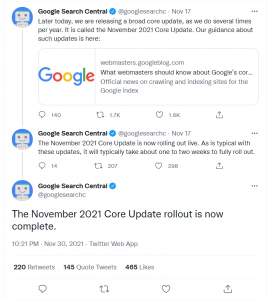 The current changes are permanent, and until the next update, there should only be the daily ups and downs in ranks that a regularly updated search index is known for.

Many website owners are hit by this update and others are panicking about the repercussions of this core update. There is a significant downfall in traffic for many. Considering the timings, thanksgiving week has always been a boon for markets and owners to promote and make sales, but with this update, the traffic seems to decline, and since the sales are affected as well. 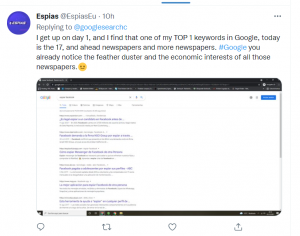 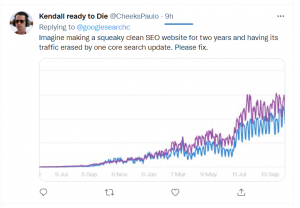 But, most of us are still convinced that this rollout won’t have that big of an impact on our sites.

Kenichi Suzuki, a respected Japanese search marketer, offered his observations of the impact on the Google search results in Japan. 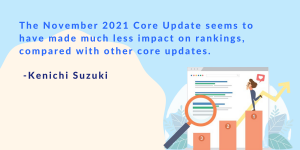 The ranking changes are not that different from daily fluctuations.

Jason Barnard discovered that the Knowledge Graph was quite volatile and that Google was returning 6% more knowledge graph-based results. According to Jason, a 6% growth is significant and on a scale, he’s never seen before.

Ammon Johns believes that the lack of attention around this upgrade indicates that Google made more infrastructure-related improvements.

This update has been rather quiet on social media, implying that whatever influence it had was not felt as broadly as a significant update would.

Finally, Google released an essay and a research paper that both point to advances in Google’s algorithms that can significantly speed up present question-answering jobs while also enhancing Google’s ability to answer more difficult queries in the future.

What to do if you’re hit by the update?

There’s nothing wrong with pages that may perform less well in a core update. They haven’t violated our webmaster guidelines nor been subjected to manual or algorithmic action, as can happen to pages that do violate those guidelines. There’s nothing in a core update that targets specific pages or sites. Instead, the changes are about improving how our systems assess content overall. These changes may cause some pages that were previously under-rewarded to do better.

A common question after every core update is how long does it take for a site to recover if it is putting in all possible efforts?

Broad core updates tend to happen every few months. Content that was impacted by one might not recover—assuming improvements have been made—until the next broad core update is released. It means those who are hit by this update should keep up with the content and wait for the December update to come out.

However, Google is constantly making updates to the search algorithms, including smaller core updates. They remain unannounced because they’re generally not widely noticeable. Still, when released, they can cause content to recover if improvements warrant.

Do keep in mind that improvements made by site owners aren’t a guarantee of recovery, nor do pages have any static or guaranteed position in search results. If there’s more deserving content, that will continue to rank well with the systems.

It’s also important to understand that search engines like Google do not understand content the way we do. Instead, they look for signals in the form of audience reactions and how well content is curated and valued. Every broad core update before it goes live, including gathering feedback from the aforementioned search quality raters, to see if how we’re weighing signals seems beneficial.

Of course, no improvement is made to Search is perfect. This is why the algorithm keeps updating.