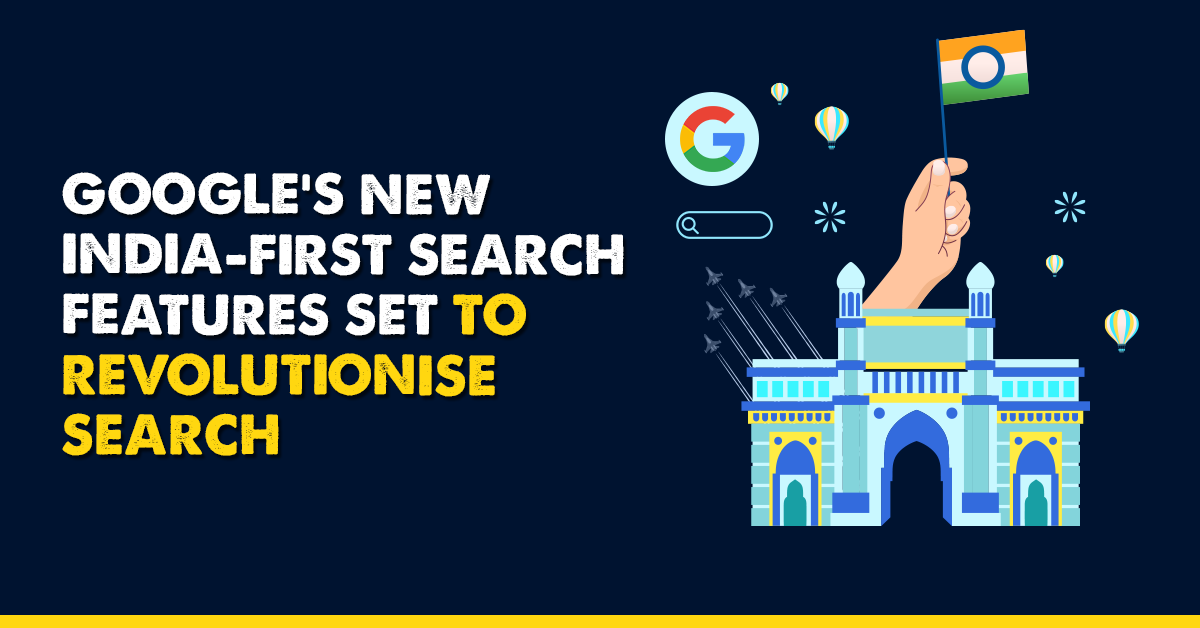 Posted at 12:01h in trending in seo by Mohit Behl
Share

In Google’s 8th Annual Google for India event that concluded last week, Google unveiled a plethora of new, innovative features that are set to transform the world of search. First in India, and eventually the world over. As India moves beyond the confines of traditional way of searching – typing in the search query – and starts to seek out information in their own language using voice search and their camera lenses, so does Google. These new features enable users to search in a more natural and intuitive way, thanks to advancements in Artificial Intelligence, across visuals, voices, and languages. In a blog post published on 19th December 2022, Google states:

“Today we hosted our 8th annual Google for India event where we shared our progress on building AI-powered and India-first innovations that reflect the country’s unique opportunities. From breaking down language barriers, to helping a billion people access information in more natural ways, to keeping people safe at every step, these innovations underscore our commitment to helping make a digital India a reality.”

Remember those times when you’d spend unnatural amounts of time going through the entire video just to find a specific section that was actually of any help? Yeah, well, so have we. You can say goodbye to that. Google’s new ‘Search in Video’ feature allows users to straight-up skip to the good part without wasting any time. We are absolutely thrilled about it, and can’t wait for the world outside India to experience it, too.

“Besides images, videos are also a rich source of visual information but it’s often hard to find something buried inside a long clip. For example, perhaps you’re watching a long video about Agra, and you’re curious if it also covers Fatehpur Sikri. With a new feature we’re piloting, you’re now able to search for anything that’s mentioned in a video, right from Search. Simply enter a search term using the ‘Search in video’ feature and quickly find what you’re looking for.”

Alongside the usual English results, Google is now serving high-quality and relevant results in your local language, too. If that is how the users prefer. Google is doing so by making use of its advanced machine-learning based language translation models and a cross-language search technology. As per Google, this functionality has already started rolling out Hindi and will soon be expanding to other Indian languages including Marathi, Bengali, Tamil, and Telugu, in the coming year.

“Language needs in India are becoming more dynamic, and multilingual, and we’re also seeing this reflected in people’s search experiences. Notably, the majority of Google users in India consume more than one language. To make it easier for people who use more than one language to seek and explore information, we’re now making search results pages bilingual, for people who prefer it that way.”

Google has introduced a new speech recognition model that makes it easier for people conducting bilingual voice search. So if you were to combine English with Hindi while voice-searching for a query, you’d still get those high-quality, relevant results you’ve come to expect of Google. With the current percentage of Indians using voice search being twice the average, it makes total sense why this feature is being released and how it is going to change the spectrum of search in the world, beginning with India.

“We want to help more people, and specifically Indians, ask questions naturally and intuitively with their voice. Today we’re announcing a new speech recognition model that can more effectively understand people who speak in Hinglish. We’re doing this through the use of a new, neural-network inspired speech recognition model that takes into account the individual’s accents, surrounding sounds, context, and speaking styles.”

A new rollicking ‘Transaction Search’ feature for Google Pay allows you to keep a track of your spends, item wise, by conducting natural language voice searches. Say if you use Google Pay to pay for the fuel, at the end of the month, you could simply ask “show me how much I spent on fuel this month’ and viola, shocking or not, the results will be revealed to you just as quickly as the scream or sigh that builds up inside your system.

“We are also introducing a useful new feature in Google Pay that makes it easier than ever to access your transaction history. You can now query Google Pay out loud using natural language questions like, “Show me how much I spent on coffee last week”.”

Apart from the above, Google is also working on a stunning new feature that uses Google Lens to identify the text written on the medical prescriptions. In short, for lack of a better way of putting it, this feature translates a doctor’s handwriting into legible text. No launch date has been announced by Google yet, and the use of this feature might strictly be limited to people with the medical fraternity.