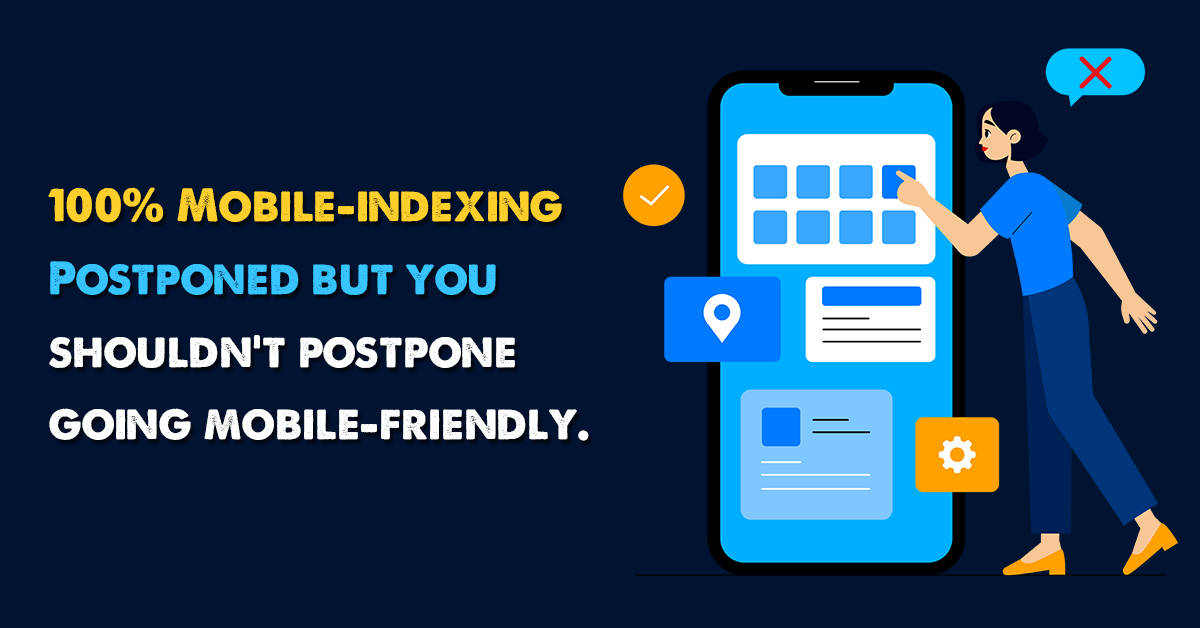 Posted at 12:41h in trending in seo by Mohit Behl
Share

In a recent turn of events, the switchover to 100% Mobile-first Indexing has been postponed, announced Google, though a new blog post shared by John Mueller. What’s more surprising (or not quite) is that Google hasn’t yet set a final date or a deadline, which was earlier supposed to be March 2021, for the final complete switchover. Google said that the decision was taken in order to provide more time to those websites that haven’t yet updated to a mobile-friendly version, acknowledging that there were some quote-unquote unexpectedly difficult challenges that they were facing.

What is Mobile-first Indexing?

As per Google’s official statement, “Mobile-first indexing means Google predominantly uses the mobile version of the content for indexing and ranking. Historically, the index primarily used the desktop version of a page’s content when evaluating the relevance of a page to a user’s query. Since the majority of users now access Google Search with a mobile device, Googlebot primarily crawls and indexes pages with the smartphone agent going forward. Starting July 1, 2019, mobile-first indexing is enabled by default for all new websites (new to the web or previously unknown to Google Search).”

It was announced in a new blog post from Google, written by none other John Mueller, who stated:

“..after analyzing the sites that are not yet indexed mobile-first, we’ve determined that some of these sites are still not ready to be shifted over due to various, unexpected challenges that they’re facing. Because of these difficulties, we’ve decided to leave the timeline open for the last steps of mobile-first indexing.

…we thought that we could complete the move to mobile-first indexing by March 2021. However, we found that some sites were facing unexpectedly difficult challenges and we wanted to accommodate their timelines.

We currently don’t have a specific final date for the move to mobile-first indexing and want to be thoughtful about the remaining bigger steps in that direction.”

Why Mobile-first Index was happening in the first place?

It was roughly five years ago, November 2016, that Google acknowledged the problem first, stating that:

“…our ranking systems still typically look at the desktop version of a page’s content to evaluate its relevance to the user. This can cause issues when the mobile page has less content than the desktop page because our algorithms are not evaluating the actual page that is seen by a mobile searcher.”

In short, there were discrepancies in the search results shown on desktop and mobiles for the same page whose desktop version was indexed by Google. It was to address this problem that 100% Mobile-first indexing was decided in the first place, to not use the content from the desktop versions of the websites for indexing or naturally, ranking. And as of yesterday, the final date for the 100% switchover has been left open-ended by Google.

Why should it concern you?

If you have a website that is your bread, butter, and jam, it is of prime importance that you switch to a mobile-friendly version i.e. optimize your website for mobiles and other handheld devices. Because as of January 2021, in a research report shared by Statista, nearly 90% of the internet users surf the web using their mobiles or tablets. So, even though 100% mobile-friendly indexing has been postponed by Google, it still prioritizes and favours websites that are mobile-friendly. The sooner you do it, the better it is for your website and business.

If you are questions or concerns regarding Mobile-first indexing, we recommend you go through this mobile-first indexing best practices guide, charted out by Google. You can also opt for one of our Monthly SEO Packages, which include a detailed On-page Audit that will tell you where improvements need to be made.