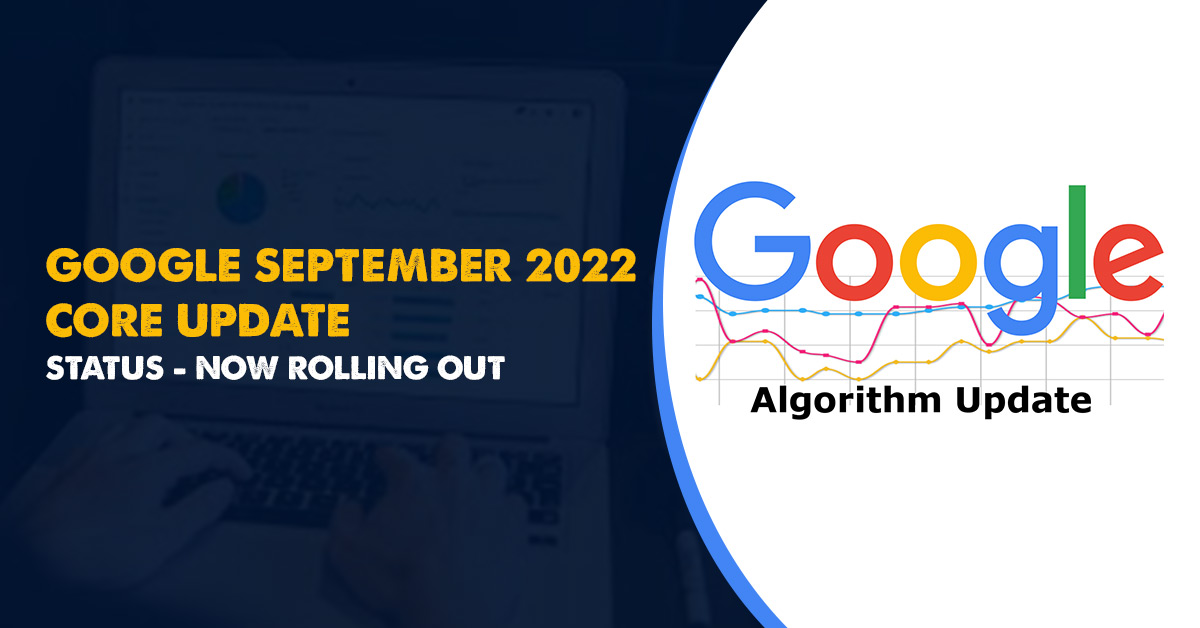 Posted at 16:28h in trending in seo by Mohit Behl
Share

Not even a week has passed since Google Helpful Content Update finished rolling out and we have in our hands the next. Google’s September 2022 Broad Core Update started rolling out on 12 September, 2022, as confirmed by Google Search Central in a tweet, and added it to the official list of announced updates. As mentioned, the update could take about two weeks to finish rolling out. And it is a global update affecting all languages. It has, to be honest, taken the community by surprise. Nobody was expecting the second core update of the year to be released this early; majority had their bets placed on November or December. Releasing it in September at least takes away the element of anticipation and nervous chatter out of the holiday season, a time when businesses and people are most vulnerable. Unless we are hit by the third core update; unlikely, but you never know with Google.

Today we released the September 2022 core update. We'll update our ranking release history page when the rollout is complete: https://t.co/sQ5COfdNcb

Whether or not this will be a big update is something only time will tell. But since the industry has it that since Helpful Content Update’s impact wasn’t as devastating as experts had speculated, the Broad Core Update has been brought in early just to make the former more efficient, or impactful. We’ll have to wait and watch. But here’s what Danny Sullivan stated in a tweet to confirm that might just be the case.

He said, and we quote: “Maybe the helpful content signal alone wasn’t enough to tip the scales and produce a change in someone’s particular situation, but when we do other updates (core, product reviews), it might add into that and be more significant….”

Even though the Helpful Content Update is inherently a part of Core Update and is constantly running, unless Google officially confirms that latter has been released to make the former more worthy, all we can do is wait with anticipated breaths for the next two weeks. Danny’s tweet begins with a “maybe”; we’ll leave it at that.

Maybe the helpful content signal alone wasn't enough to tip the scales and produce a change in someone's particular situation, but when we do other updates (core, product reviews), it might add into that and be more significant….

Last Core Update was released in May 2022

It has been nearly 4 months since May 2022 Core Update finished rolling out. Websites that—negatively affected by it—have made subsequent improvements in the content and overall quality should see the tides turning in their favour, hopefully, by the end of this update. Google’s advice on core updates remains the same. “We confirm broad core updates because they typically produce some widely notable effects. Some sites may note drops or gains during them. We know those with sites that experience drops will be looking for a fix, and we want to ensure they don’t try to fix the wrong things. Moreover, there might not be anything to fix at all.”

You can go through Google’s official blog on how to deal with core updates for more details.

Industry chatter and the next course of action.

Initial reports suggest that quite a high percentage of websites are experience huge fluctuations and ranking drops. Some have noticed traffic took a hit but not the rankings. As we said, we are still in the very early stages of the rollout and any assumptions you have now might change by the time the update finishes roll out. All you can do right now is keep a track of everything. Whether or not this is big update, will be known in the next few days. Until then.