Why can’t Google documentation be up to date? 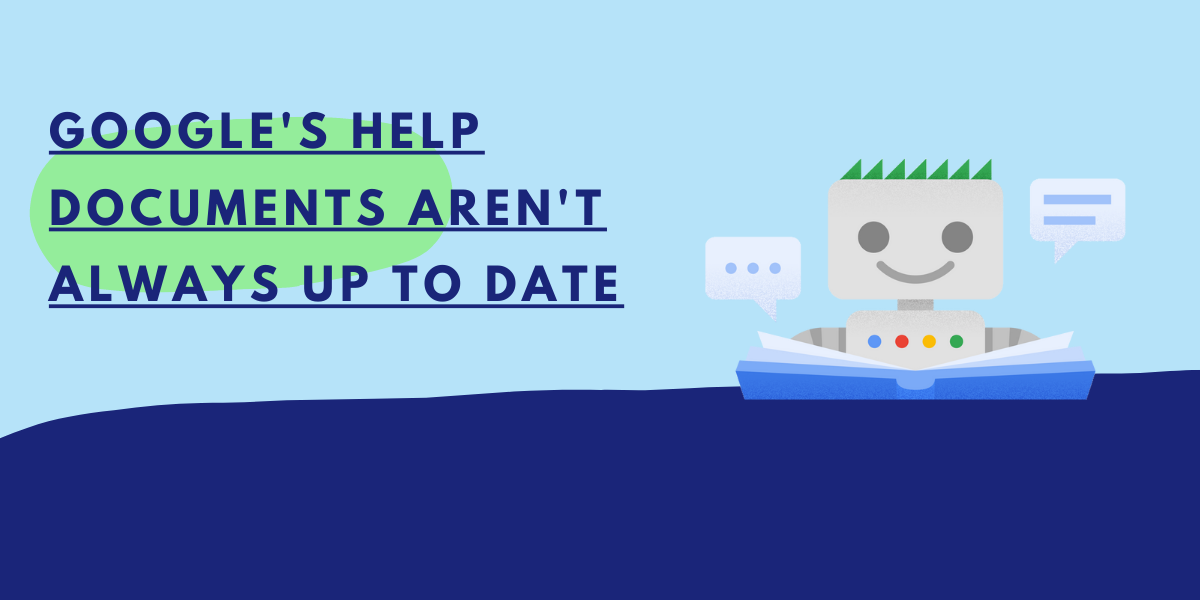 Posted at 08:52h in trending in seo by lotus
Share

Sometimes in life, you have to make hard choices, and if you’re a sound SEO professional you will know that you cannot always depend or trust on google help documentation because it is not updated regularly and have some shortfalls which were discussed in the latest episode of Google’s SEO & Devs web series on YouTube.

Martin Splitt of Google’s Developer Relations team sits down with Michael King, the founder and managing director of iPullRank, to discuss how Google’s documentation can drive developers to distrust SEO professionals.

Based on the information in Google’s official documentation, SEOs make recommendations to developers.

Google acknowledges that its help documents aren’t always up to date and that doing your own research on recommended guidelines is worthwhile.

Google strives to maintain those documents up to date and reliable, but the data sometimes falls behind what’s working in SEO and what’s no longer relevant.

They discussed a problem that evolved in 2019 when Google announced it had ceased supporting rel=”next” and rel=”prev” years before informing the search community.

As a result, SEOs were instructing developers to use code that was no longer relevant to Google Search.

Rather than making a formal announcement, Google just took down the rel=”next” and rel=”prev” documentation.

No one from Google informed the search community about the change until John Mueller, the company’s Search Advocate, was asked about it on Twitter.

Some SEO specialists and developers may have arrived at that conclusion on their own after observing how Google handled pagination without the usage of rel=”next” and rel=”prev” tags. 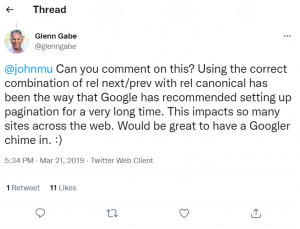 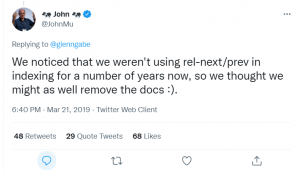 Why doesn’t google keep up with the documentation?

Because Google Search is always changing, Splitt advises against relying just on the company’s documentation.

Regarding the rel=” next” and rel=” prev” situation, Splitt says:

“The docs are not always in phase. We’re doing our best to work with the teams and help them to keep their documentation updated, but it does every now and then happen in this case like a bunch of engineers in search quality figured out — ‘hey, hold on, we actually don’t really need the rel-next and rel-prev links anymore to figure out that there’s like pagination going on. We can figure that out from other things on the page by themselves.’”

Google engineers disabled support for the code when it was discovered that it was no longer needed.

Splitt explains the decision-making process behind communicating this change to SEOs and developers.

“… What do you do? Do you either update the docs to just quietly remove that part because it no longer is relevant?

Or do you go like ‘Hey, by the way, this is no longer necessary? And truthfully speaking it hasn’t been necessary in the last six months.’

Knowing very well that people are reading the documentation, making recommendations based on it to other people, and then these people then invest work and time and money into making that happen.”

“And the alternative would be to let it live there in the documentation, even though it’s wrong it doesn’t hurt.

So we went with the full-frontal way of going like — ‘Okay, here’s the thing. This has been removed a while ago and we’re sorry about that, but now our docs are updated.’

And I think none of the choices are easy or necessarily perfectly good, but it’s just what happens. So I think we’re trying to keep the docs updated as much as possible.”

So, that’s how google handled the issues which obviously creates a lot of trust issues for developers and SEOs to again trust google documentation, so it is always advised not to rely on google help documentation and do your own research and make wise decisions.