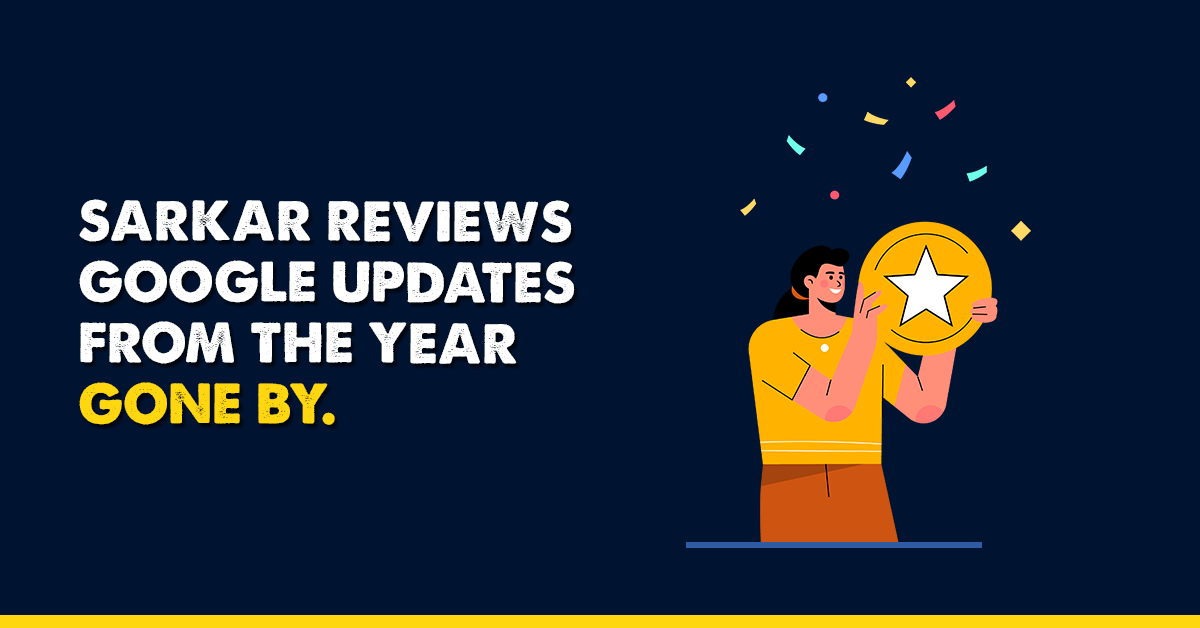 Posted at 11:51h in trending in seo by sarkar
Share

This year saw another flurry of Google updates, a tactic we’ve grown accustomed to, of late. There were as many as 10 officially-announced updates, and a whole lot of others that didn’t care to bother us. Besides the usual, there was a brand new update, Helpful Content Update, introduced by Google to keep us on our toes and its search results flowing smoothly. Sarkar, the game that he is, took it all in his stride. As we come close to bidding 2022 a goodbye, it seems like a perfect opportunity to delve a little deeper and review all the updates we were graced with. Let’s have a look.

Broad Core Updates: May and September 2022

As expected, 2022 saw two Broad Core Updates shake up the system and cause a few rubbles, sometimes more than rubbles. Even though fears were persistent for a third Broad Core Update to be unleashed during the holiday season at the end of the year, thankfully, we were spared. But this means that, given the time that has elapsed since the last core update, the next one might just be around the corner. We are thinking of January 2023, but are also keeping our fingers crossed.

SarkarSEO Reviews: “The first update, officially titled May 2022 Core Update took a little over a fortnight to finish rolling out, and was complete as of 9 June 2022. But not before sending the cat among the pigeons, ruffling a few feathers and what not. Greatest volatility in terms of ranks and traffic were noticed in the first week of June 2022. It is important to note that the May 2022 Core update focused on how relevant a website is overall, including user experience, rather than individual site issues. General consensus within the SEO community is that it was  truly widespread and destructive in its scope, across all languages and all niches.

The second update, officially titled September 2022 Core Update took two weeks to finish rolling out, and was complete as of 26 September 2022. Even though this update rolled out fast and strong, with some rank volatility very noticeable a day after its release was announced. It is important to remember that the September 2022 Core Update was preceded by the first Helpful Content Update that finished rolling out barely two days before. A double-blow, if you may, for some. However, general consensus within the SEO community is that this update was less impactful than some of the other core updates, including the May 2022 Core Update.”

The biggest surprises of all, however, was the introduction of Helpful Content System, and by extension, the Helpful Content Update. The year 2022 saw not one but two Helpful Content Updates, the second of which is yet to finish rolling out. In Google’s words, The helpful content update aims to better reward content where visitors feel they’ve had a satisfying experience, while content that doesn’t meet a visitor’s expectations won’t perform as well.” It is a part of Google’s automated ranking systems, and an effort to better ensure that people see original, helpful content written by people, for people, in search results.

SarkarSEO Reviews: “The first update, titled August 2022 Helpful Content Update took about two weeks to finish rolling out, and was complete as of 9 September 2022. It aimed to target websites with high amounts of unsatisfying or unhelpful content that is primarily written for the search engines, as opposed to people, as proposed. And even though it was a site-wide algorithm update targeting English language websites, its effects did not seem as devastating as some had touted them to be. General consensus within the SEO community is that this update was a rather uneventful affair and that the full course of its impact will only be revealed over the course of time.

The second update, titled December 2022 Helpful Content Update started rolling out 6 December 2022 and is still going. We will update its impact after taking note of the general consensus only after it has officially finished rolling out. Till now, it feels to be going along the same lines as the first one. Again, we are keeping our fingers crossed.”

Nobody was expecting more than two, with many placing their bets on just one. However, you can always count on Google to do the unthinkable. It may have held back a tad bit on its Core Updates but made it up by releasing three Product Reviews Updates in a year. The Product Reviews Update aims to make improvements in Google’s automated ranking system by ensuring people see product reviews that are not a mere summary of the product but an in-depth review after its usage, backed with high-quality content. Alan Kent of Google said “This will make it easier for us to get sound purchasing advice in front of users, and to reward creators who are earnest in being helpful.”

SarkarSEO Reviews: “While the first Product Reviews Update took about 19 days to finish rolling out, the other two took only 6. This was also the update that built on the previous updates from last year, and shook up the system just enough for people to notice or attribute their downfalls to. The second update barely caused noticeable fluctuations to the tracking tools and went quickly as it came. The third update either did not create any buzz or chatter within the SEO community or did a lot. But there is no sure shot way of knowing as it overlapped with the September 2022 Core Update. General consensus about all the three updates is that barring the first, the others were not as impactful as one had feared.”

The most short-lived of the 10 updates that were released by Google this year. This Spam Update, which vanished as quickly as it had come, aims to detect spam through SpamBrain, its AI-based spam prevention system and omit those websites from the search results altogether.

SarkarSEO Reviews: “Titled October 2022 Spam Update, this update lasted less than 48 hours, a window not wide enough for tracking tools to detect any kind of fluctuations or draw a conclusion. Websites that tried to game the system by appearing more relevant than they actually were, by following blackhat and spam-based strategies were hit nevertheless. However, it is safe to say that overall, its impact wasn’t destructive or widely felt.”

Google’s Link Spam Update operates along the same lines as its Spam Update, albeit specifically targeting spam that generates through links of low-quality or unnatural link-building. This was a global update and affected all languages. That and it took about two weeks to fully roll out. Google has also stated that “Ranking may change as spammy links are neutralised and any credit passed by these unnatural links are lost. This launch will affect all languages.”

SarkarSEO Reviews: “Titled December 2022 Link Spam Update, this update overlaps with December 2022 helpful Content Update that still hasn’t finished rolling out. The results, whenever we arrive at them, will be fairly muddled as it will become a little to determine which of the two updates is causing fluctuations. But since this is a link spam update, we are assuming the results will also show the number of links that have been impacted. If you happen to notice any ranking drops or penalties being sent your way, then it may well be this update behind it. We will keep you posted and present our report once we have confirmation about its completion, which should happen before this year comes to a close.”

SarkarSEO Reviews: “Titled Page Experience Update for Desktop, this update took 9 days to fully roll out, and was complete as of 3 March 2022. General consensus within the SEO community is that this update did not intend to have the same kind of impact as other algorithmic updates, as it is more of a continuous process. You’d do well if you have CWV metrics such as LCP, FID, CLS, and HTTPS doing your work for you.”

Our team, and Sarkar, personally, spends a lot of time studying these updates while keeping a track of the industry chatter as well as the tracking metrics for hundreds of websites. It is exactly why we are able to come up with solutions and counter-strategies, all whitehat, to stay a step ahead of others. Each of our services, links, content-pieces, has been painstakingly tested for every update that Google releases. And it is exactly why we have thousands of happy customers across the globe across niches. Others may call it obsession. We call it attention to detail. Go ahead, book yourself a call or pick a Monthly SEO Package that fits you best. And we’ll take it forward from there. We wish you a happy new year!